Guitarist Colin Davin has emerged as one of today’s most dynamic young artists. He has performed across the world from Carnegie Hall to the Alhambra Palace in Granada, Spain. He collaborates with some of the finest musicians in the world. 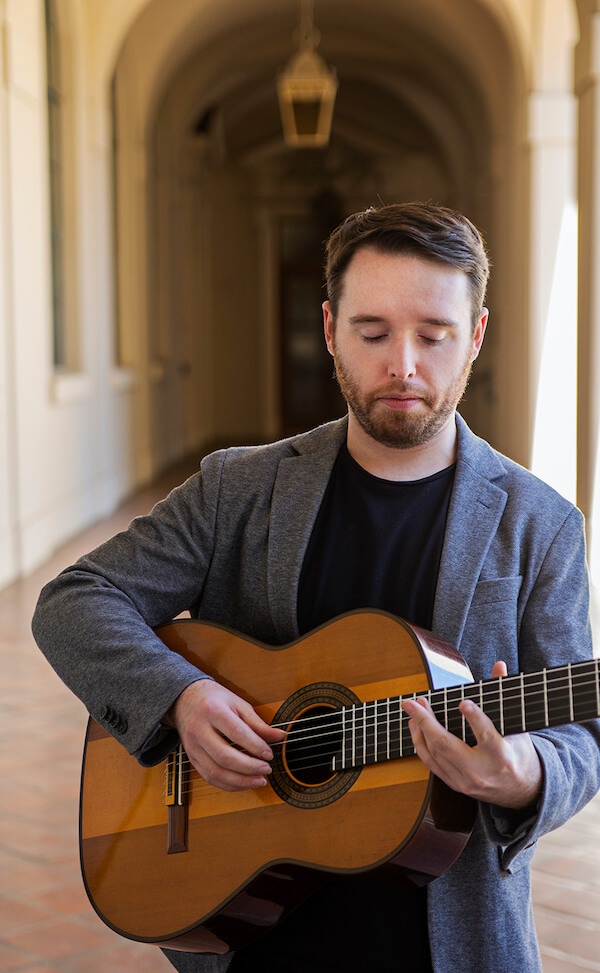 Hailed as “the real thing, a player with a virtuoso’s technique, a deeply expressive musicianship, and a probing imagination” (American Record Guide) who “has the distinct ability to wring the depths of expressiveness from all that he plays” (Classical Guitar Magazine), and for his “precision, musical intelligence and passion” (Cleveland Classical), guitarist Colin Davin has emerged as one of today’s most dynamic artists. Recent highlights include concertos with the Wisconsin Chamber Orchestra, Aiken Symphony Orchestra, New Mexico Philharmonic, Lake Placid Sinfonietta, Lakeside Symphony Orchestra, Champaign-Urbana Symphony Orchestra, and Richmond Symphony; collaborations with Sharon Isbin at the 92nd Street Y, Chautauqua Institution, and Baltimore Classical Guitar Society; and performances with violinist Tessa Lark and cellist Edward Arron.

In 2015, Colin appeared as a featured musical guest on the final season of The Late Show with David Letterman alongside the late Jessye Norman. He has performed across the world, including at Carnegie Hall, Alice Tully Hall, the Metropolitan Museum of Art (on historic instruments from the museum’s collection), the ELLNORA Festival at the University of Illinois, the Alhambra Palace in Granada, the Paris Conservatoire, the Fridge Fringe in Dubai, and venues throughout the United States and Canada. His collaborators include GRAMMY Award winning soprano Estelí Gomez and Dallas Symphony Orchestra principal harpist Emily Levin.

He has been a regular guest artist at the Aspen Music Festival, and has four times been a guest teacher at the Afghanistan National Institute of Music in Kabul, Afghanistan. Colin’s solo recording, “The Infinite Fabric of Dreams” has been praised as “some of the finest interpretations I’ve heard… achingly beautiful… a thoughtful, perceptive interpretation, filled with details often missed” (American Record Guide).

From 2015-2022, Colin Davin served on the conservatory faculty of the Cleveland Institute of Music. As Co-Head of the Guitar Department alongside Jason Vieaux, Colin developed an already-esteemed guitar program into one of the most dynamic of its kind in the country, pushing forward new ideas in programming, repertoire, collaborative projects, and curriculum development.

In demand for his insights in masterclasses and lectures, he has been invited to teach in a guest capacity at institutions including The Juilliard School, the Peabody Institute, Oberlin Conservatory, University of Cincinnati College-Conservatory of Music, Arizona State University, and the Aspen Music Festival and School. He has won numerous prizes in international competitions and was a two-time finalist in the Guitar Foundation of America International Concert Artist Competition. He holds a Master of Music from The Juilliard School, where he studied with Sharon Isbin; a Bachelor of Music from the University of Southern California with William Kanengiser; and underwent preparatory studies at the Cleveland Institute of Music with Jason Vieaux.

Beginning in 2022, Colin Davin joins the faculty of Shenandoah Conservatory at Shenandoah University in Winchester, Virginia, as Director of Guitar Studio and Associate Professor of Guitar. As part of a visionary and collaborative arts community, Colin seeks to train students who are prepared to build meaningful careers in a changing artistic and cultural landscape.

Bach: Prelude from Cello Suite No.6

Use the form alongside to get in touch for booking Colin and other inquiries. We will get back to you as soon as we can.