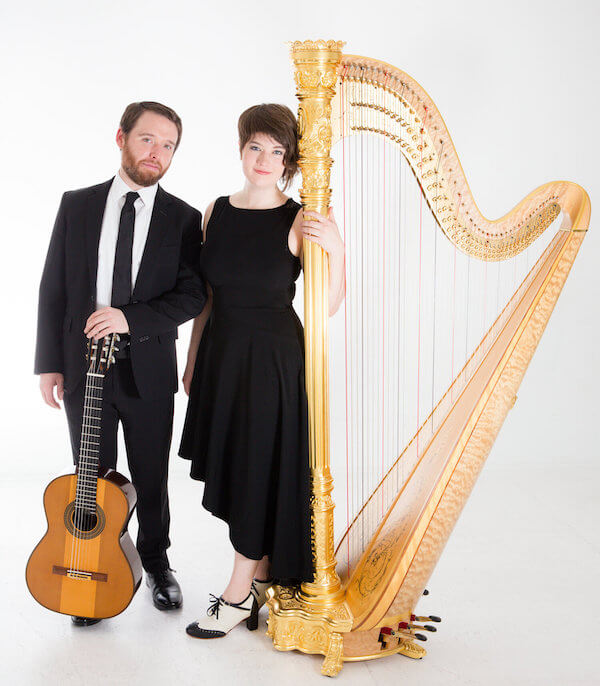 A “clearly felicitous combination of two plucked string instruments,” (Cleveland Classical), the Davin-Levin Duo is comprised of Emily Levin, Principal Harp of the Dallas Symphony Orchestra, and Colin Davin, Guitar Department Co-Head at the Cleveland Institute of Music. Since their first performance together in 2015, the Davin-Levin Duo has revolutionized the genre, expanding the repertoire through commissions and arrangements, and establishing their instrument combination as a dynamic chamber music experience.

The Davin-Levin Duo has appeared around the United States, performing concert experiences ranging from (Le) Poisson Rouge in New York City to intimate wine cellars in Boulder, CO. They have been featured at the Cleveland International Classical Guitar Festival, the Fine Arts Chamber Players, University of Cincinnati College- Conservatory of Music, and others. In April 2020, Colin and Emily released their debut album, Banter, featuring their arrangements of de Falla, Ravel, and Philip Glass, alongside two commissions by Dylan Mattingly and Will Stackpole. Banter was selected for Classical Guitar Magazine’s “10 Favorite Albums of 2020” and has been featured on radio programs in the U.S. and Australia.

Upcoming performances include the World Harp Congress in Cardiff, Wales, a return to the Cleveland International Classical Guitar Festival, and the Lyric Chamber Music Society in New York.

Back to All Projects

Use the form alongside to get in touch for booking and other inquiries. We will get back to you as soon as we can.